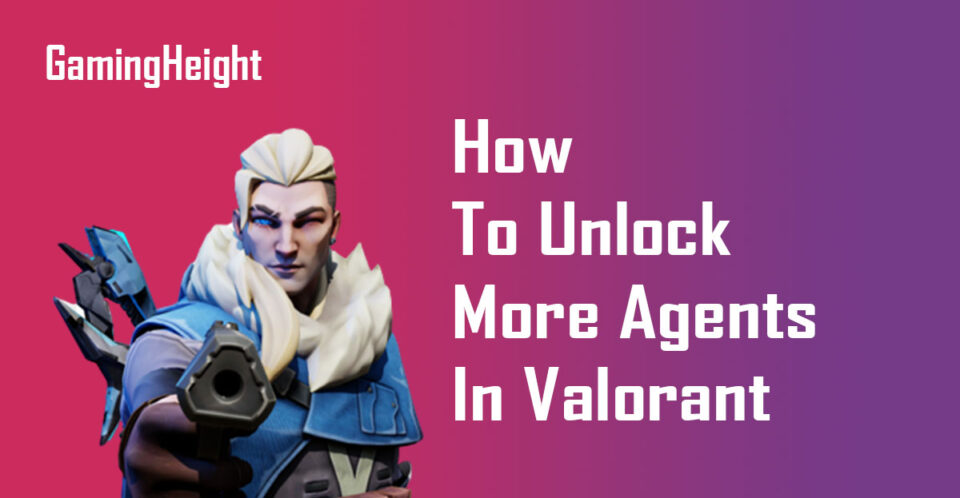 Agents offer playable characters in the Valorant game and they are identified by a unique set of abilities that tell them apart from each other. Each agent can perform either of the following roles which are Sentinel, Duelist, Initiator, and Controller.

However, to play with agents in the Valorant game, you will first need to unlock them. In this guide, therefore, we will be showing how you can unlock more agents to make the most out of the game.

How To Unlock More Agents in Valorant

At the moment, there are fourteen agents in the Valorant game with more to come in future updates. Once you complete the introductory contract, your first two agents are completely free. Completing this contract will open up more contracts that will give you the first five tiers for free depending on the agent you choose in the introductory phase.

After this phase, things can get a little tricky. You must however bear in mind that you must have attained level 5 with a locked agent to unlock them as a viable option for your roster. Let’s look at the ways you can unlock more agents in Valorant.

This first method for unlocking new agents is the easiest as it is just as simple as playing Valorant. As you go about leveling yourself up in the game by playing more matches, you will have access to two tokens. At levels 5 and 10, you can now choose to unlock any agent that fits your preference.

Let’s guide you through how to do this.

After completing all these steps, you should access the contract of the unlocked agent. There are ten levels for each agent, and this can be unlocked at level 5 as you play matches and collect XP.

Your target should therefore be on playing games and collecting XP to boost your way towards gaining new agents. You can also ensure that you complete daily challenges, as they are a great way to unlock new XPs.

To complete tier 1 of an agent’s contract, you will need 25,000 XP, and for every tier, you would need an additional 25,000 XP plus the XP of the previous tier.

What we are simply saying is as follows:

This means all the required experience points for an agent will be 375,000 XP when you add up all the XPs together.

Method 2: Paying your way through

The easiest way to get more agents if you do not want to go through the hassles of earning lots and lots of XP is by buying your way through. However, you must be willing to spend real-world money, as that is the only way you can escape not grinding out XP. So, if you have money to splash around, you can simply buy the agents.

Just like other transactions in this game, the final bill is not something that comes easily. The bill is as follows:

To cut down on the agent’s costs, let’s get you up to speed with a trick you can work on. For the first or first two or even first three levels, you should grind that out relatively easily. Instead of grinding your way up to level five, you can simply move on to another agent and repeat the same process.

Once you have attained level three for all the agents you want to unlock, you can pay for the rest for half or even less of the price it would have originally taken if you had paid your way through everything. That sounds soothing, right? Great. Go ahead and try out this hack.

How to unlock agents in the valorant game faster

The fastest way, just as we have outlined, is to pay for these agents straight from your pockets. However, there is every tendency that you might be wary of the price, as there are fourteen agents in the game with more still to come.

If you don’t have the $210 required to pay for all the agents that exclude the two you would get for free, you would have to play your way through the game and grind out XPs.

To unlock these agents, the XP you gather during gameplay is vital. So, if you want to unlock agents faster, you have to try and grab onto as many daily challenges as possible, and be well prepared for long gaming sessions.

If you don’t want to spend money to unlock all the Valorant Agents, you would have to go through the hard work of dedicating some time to playing the game. Remember that you have about 375,000 experience points to reach Level 5 for each character to unlock them. The gameplay missions and daily challenges can help you gather this.

Is it possible to unlock all the agents in Valorant?

You can also decide to spend 1000 Valorant points to get a locked Agent from levels 1 to 5 even though this is optional.

Do I have to pay to Unlock Agents in Valorant?

It is possible to unlock agents in Valorant for free, although this will take some time. An agent will be available to be unlocked once you have attained level 5 for that agent.

And you know, to level up in the game, it will be based on you collecting experience points. If you don’t want to pay, you don’t have to. Although, you will take some time to unlock agents.

How Long Will It Take Me to Unlock an Agent in Valorant?

The length of time it will take you to unlock an agent is completely dependent on you as it will be based on how much time you spend playing, the missions, and the challenges you can complete.

Remember that your agent must attain level 5 before you can unlock them. This will take a while to grind out XP to unlock the agents.

Can I Unlock All Agents For Free In Valorant?

Yes, but that depends on your strength and determination to grind the game to XP. In unlocking more than one agent for free in valorant, you have to activate the contract for all agents in the collection board and play them one after the other.

In unlocking them for free, you need to pick the contact for the agent you are interested in at the moment, and play until you get to level 5, which will enable you to open the characters. Each agent has 10 levels.

However, you can combine daily challenges with everyday challenges, as the former will give you up to 6k XP points game, and that is because agent unlocking can be time-consuming, as the required points to unlock one of the agents are 375000 XP, and you have to get to level 5 before you can do that.

How Can I Earn More XP Within A Short Period Without Paying For It?

For you to unlock agents in valorant, you need XP, and for you to get those points within a short period, buy them or play your way up to get them.

Thankfully, there are three ways to get this done faster without paying to get them, and that can be practiced by

How Long Will It Take Me To Unlock One Agent In Valorant?

It might take you up to 28 hours and 375000 XP to unlock one agent, but the process depends on you and how you want to speed up the process, as you can spend less than that if you follow the three ways to earn XP listed above.

How Long Will It Take Me To Complete One Agent Contract In Valorant?

How Do I Claim My Agent After Completing The Contract?

There is no special way to claim the agent, as the agent will automatically be available to you after you might have completed level 10 of the particular agent contract.

How Many Agents Can I Acquire In Valorant?

The answer to this question changes with time, as the game is regularly updated. However, I will feed you the information based on 2022, depending on your play style.

There are 19 agents, and more than one best agent in valorant, but you will be the one to determine which one is best for you. I will feed you with brief details of their roles and abilities. However, I will divide them into different categories for you to choose from easily.

This agent possesses great initiation, suppressive, defending, and aggressive ability, especially when paired with Jett or Raze (duelists). What a great agent to unlock for your game. More of his features include

Kay O can fire an explosive fragment that explodes multiple times after contact with the floor, causing damage at the center of the blast and the outer edge that can end another player’s round.

Kay o throws a flash and quickly looks away, as the flash effect can blind unsuspected players in sight.

KayO’s opponent is always rendered useless for a short period, as the opponent will not be able to use his or her ability after throwing out his suppression blade.

Owl drones are sent out to scout the area, forcing the opponent to give away its position, and in conjunction with a recon bolt to make the opponent visible.

The arrow possesses the ability to give out opponents’ location by making them visible when it lands in the area it has been shot too. This shot can also be used to check out quick corners and bomb sites around the area.

Hunters Fury: It helps restrict the opponents’ movement until your team has their way, and it can go through walls to blast it up.

Has the flashpoint, fault line, aftershock, and rolling thunder feature coupled with a distinct scanning ability.

She has the offensive and defensive ability to use her trinkets to distract the opponent to become prey for her team. However, Skye cannot heal herself, but only her teammates. Her abilities (trailblazer, guiding light, regrowth, seekers) are none to be compared with.

This is the last agent in the initiator category that also possesses the ability of a few agents in this group in conjunction with hers.

According to Riot, the developer of the game described the Duelists as self-sufficient fraggers who their team expects, through abilities and skills, to get high frags and seek engagements first.

How Best Can I Set Up A Team With These Agents?

To have the best and most balanced team in a valorant game, you will have to choose Two Sentinels, One Initiator, One Duelist, and One Controller.

Apart from the first two agents you will have in the game for free, you will have to acquire other agents yourself. We have helped show you the best way possible. So, read through and get those agents you like.

How To Play Valorant On Mac Without Bootcamp

How Many Skins Are In The League Of Legends?

Valorant Not Enough Disk Space: Why and Solutions

Guide on How to Delete an App on Nintendo Switch

4 Methods on How To Get Unbanned In League Of Legends

How Can I Open Chat In League of Legends?