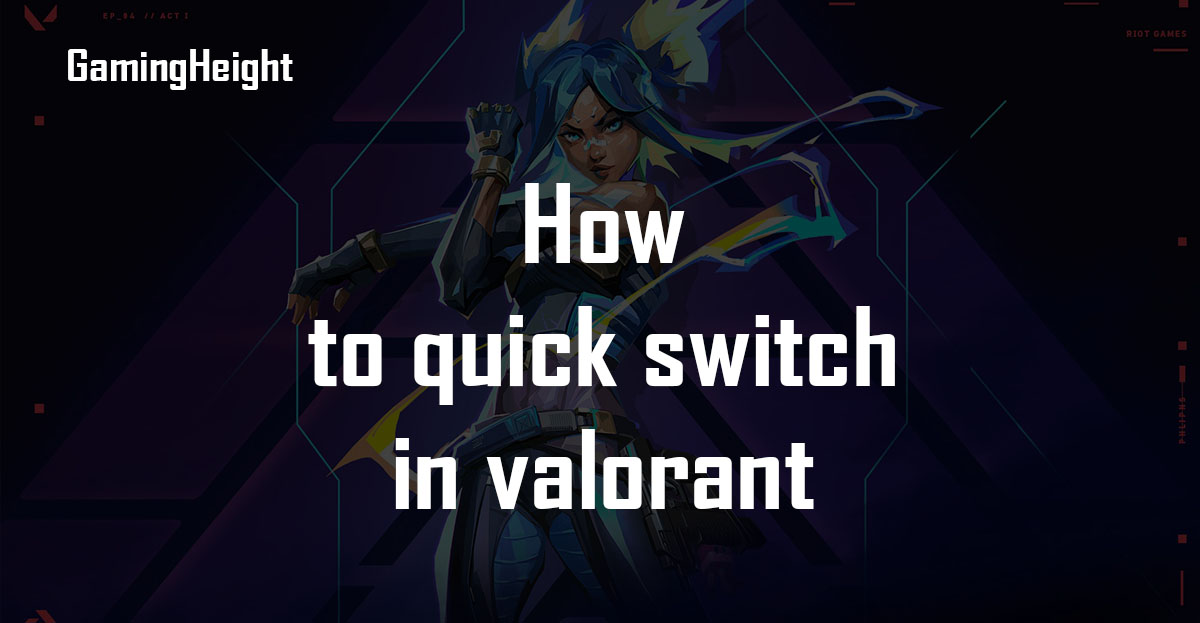 As a cipher main who opts to quick switch weapons in the valorant game, you might have had it wrong all along. You might have wrongly reloaded your weapon. In this guide, we will show you how to do this appropriately by quick switching in the game.

How To Quick Switch in Valorant: FAQs and Guide

Riot Games have inserted a peculiar set of abilities into this first-shooter game. With its lively agents and immersive lore, valorant is fast becoming one of the stand-out shooting games of the year. However, you must know that valorant is all about a fast-paced and competitive system with shooting as its core.

Different players have complained about losing duels because they briefly bat their eyelids. Timing is important in the valorant game. This is why players are always looking for ways to save time in the game, as it is a precious asset.

A good example of what saves time in the valorant game is quick switching after you have loaded your weapon. Cipher players have a better advantage that helps reload quicker, but you will have to switch to cypher’s cam.

It is possible to cancel animation cypher’s reload using his cam. You just must press it twice as much. The timing of switching to the camera differs as you change weapons. A professional coach can help you understand switching and timing with weapons.

Players of the game have discovered that a good way to quickly switch after reloading their weapon is to tap into Cypher’s camera and then cancel it. If you are using a primary rifle, reloading will take you an average of 2.5 seconds. In a match, this can prove costly. It can be the difference between winning and losing a match.

Players of the game try to cancel the reload animation phase by switching to a knife and almost immediately to their guns. Although with this new trick, cipher players will be much quicker. So, to quick switch in the valorant game, you have to instantly equip the camera once you have reloaded and use Vandal.

This trick makes more sense with Vandal, and with the operator, it gets even better. By cancelling the camera after reloading, you can save an average of half a second. This trick is worth mastering in your games. It might take some getting used to, but with a lot of practice, you will be good at it in no time at all.

Animation cancelling is something that players of the highest levels use in different games to save time. There is also another trick of swapping weapons during an ability cast. However, this animation cancellation can only work on agents like Jett and her cloudburst ability.

Changing weapons during the ability cast makes swapping faster. The system has been designed so that players can pull out their weapons faster once the ability is in play. The speed of the weapons depends on the agent and the ability you are using.

Phoenix’s curveball has been considered the fastest in the game. Players in the valorant game work by holding a knife and using an ability that allows the agent to change instantly to their primary weapon. This will cancel the animation, as the player prepares the gun. This means players will be ready to fire once they use their ability, making them respond well to any enemy’s movement.

How Beneficial Is Quick Switching In The Valorant Game?

Scrolling weapons might help increase the animation time. It works on some firearms, but when it comes to basic weapons, it does not cut the chase. For basic weapons, you should stick to the conventional technique, rather than quick switching.

These tricks are not something you will learn going solo on ranked games. This is where a coach plays an important role. A coach will help you learn these tricks that may seem trivial at first, but will be important in the long run.

What Agent Can You Use To Switch Weapons Quicker In The Valorant Game?

Chamber has been described as the ultimate agent to use if you want to switch weapons quicker in the valorant game. Some players of the game have described the chamber’s kit as divine, as it was made for killing people. The pressure you can achieve with this agent and the number of aggro plays is through the roof.

With chamber, there is a neat trick to master this teleporting sentinel, so you can switch from the agent’s primary weapon to the headhunter pistol faster. To use the chamber effectively, follow these simple steps:

So, there you have it, you have put things in place to switch easily with the chamber. Once you are in the game and feel the need to switch to the headhunter pistol, you can simply tap the Q key to quickly switch to this weapon.

This quick switching feature is ideal for situations where you have run out of bullets or when you need to take a follow-up shot after using an operator. Mechanically talented players can cause a lot of damage in the valorant game, and the chamber is that perfect agent to help them maximize pressure on the enemy.

Is It Possible To Change Weapons To My Left Hand In The Valorant Game?

Valorant has been designed with a default mode of the right-handed view. Riot Games have however thought this through and decided to adopt a different view model for left-handed payers. This means you can also change the view of your game.

If you are a left-handed person and find the left-hand view much more appealing than the right-handed view, then valorant has got you covered. There have even been rumors that this view makes you have a god-like aim, and as such, right-handed players are now using this view too.

If you want your operator on the left side, simply follow the steps below:

Once you have followed these steps, all your weapons will move to the left side. This feels cool, right? We thought so too.

Read through and explore the game.