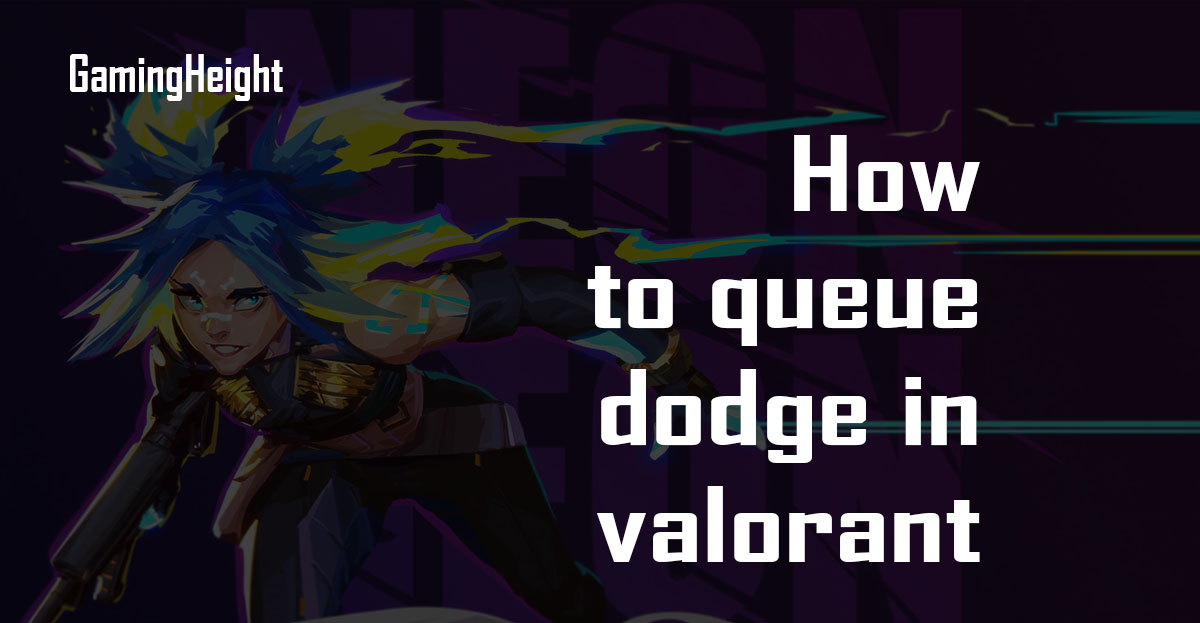 Dodging a valorant queue is highly discouraged in valorant, although it is the only way out sometimes. Even though this is not the ideal option, it is necessary for some scenarios. However, you must be careful of doing this on repeated occasions.

In this guide, we will show you how to dodge a queue in valorant. Stick around as we explore.

How to Queue Dodge in Valorant

Dodging a queue in valorant is a serious issue, especially because the match-finding screen will be back to look for everyone in a game. Dodging a queue has to do with leaving a match without participating in a single round in the game, and this comes with consequences.

Let’s see the different ways to dodge a queue in valorant.

Playing the game without an internet connection is impossible, right? Exactly. This means valorant will not be able to send or receive notifications from the Riot games server. You will therefore appear offline in the game, and you will be automatically logged out.

Apart from disconnecting your internet, you can also try closing the valorant game. This is what most players do, and you will use shortcut keys on your keyboard to do this. Press the Alt+F4 keys to do this.

You can also do this through your task manager. You will also use shortcut keys to bring your task manager up on your computer. To do this, simply press Ctrl+Shift+Esc. You can see the task manager now, right? Great. Search for the valorant application here, and click on the end task option. Closing the application will make you dodge a queue in the game.

Another great way to dodging a queue in Valorant is to not select an agent. Once a match is found, you know that all players will be put on the agent selection screen, right? Exactly. If you do not select any agent on this display screen, you will be taken back to the mode selection screen.

This means you can quit a match and yet not be penalized for not selecting an agent. Although, when you do this, you will receive the warning of dodging a queue, so you have to be careful.

Consequences of Dodging a Queue

For players who are fond of consistently dodging games, Valorant has released potential punishments. So, players who are in the habit of in-game AFK-ing could face consequences such as XP denial and rank deductions. Valorant takes into account the history of the player with this offense, before giving out the punishment.

Riot Games has stated that dodging queues in some scenarios is inevitable, especially when you consider some toxic teams in the game. They will continue to maintain this stance, so you can easily regain your rank rating. However, you won’t face points deductions for dodging queues occasionally.

Dodging a match is necessary for some scenarios, just as we have stated. However, this does not mean you should keep up with this. The game won’t be enjoyable for you and others if you keep dodging matches, right? Exactly. This is the point that valorant is trying to establish. They want to ensure that the game has fewer people who do not participate in matches.

Let’s see some likely penalties for dodging queues in the valorant game.

Ultimately, the game has put such restrictions in place to discourage players from leaving the match unnecessarily. This is so the game won’t become tiresome for other players of the game.

Unavoidable Reasons to Dodge a Queue

The valorant game features 16 brokers and 6 maps for players to choose from. The valorant game does not necessarily show the execution of the map that a player likes the most. However, the developers have set up an algorithm to ensure that identical maps do not continue to pop up for the same player.

Players have to dodge queues in some scenarios. In this scenario, players will get different brokers that other players in the queue have locked, not even what they selected. Also, the players could face a map and even get dequeued because of a crash or web malfunction.

You must know that other players are involved in the same queue as you. So, you attempting to dodge a match will come with the inconvenience for these players. This is why the valorant has placed a penalty for dodging a queue. Although the rule is fairly easy for players who dodge queues in the game occasionally.

With the new valorant patch 2.05, the penalties that these players will face have become different. The new patch has been set up so that if you dodge an agent to select, you will be stopped from queuing for a while. For those who have picked dodging queues as a habit, they will be banned longer.

The issue is that dodging a match keeps you away from the map, and as such, obtaining agents might be difficult. If you dodge matches far too often, you will be an inconvenience to other players of the game. Therefore, you must be aware that valorant has a ban system. This means you can face longer ban spells, because the game automatically assumes you do not want to play the game.

The system has been set up to penalize players for intentional dodging behaviors, because this will affect their teammates and other players in the game. In some scenarios, a certain amount could reduce your rank rating.

This penalty might not affect your MMR, although you must desist from dodging queues. If this stacks up for a while, your rank in the game will decrease significantly. You can get your rank rating in the next match, though. You just have to ensure that you play your best game and are not fond of dodging queues again.

Dodging a queue is sometimes an important precaution in the valorant game, especially when you consider some toxic teams. We have highlighted some ways to dodge a queue. However, you must not make this a habit, because there are severe consequences.