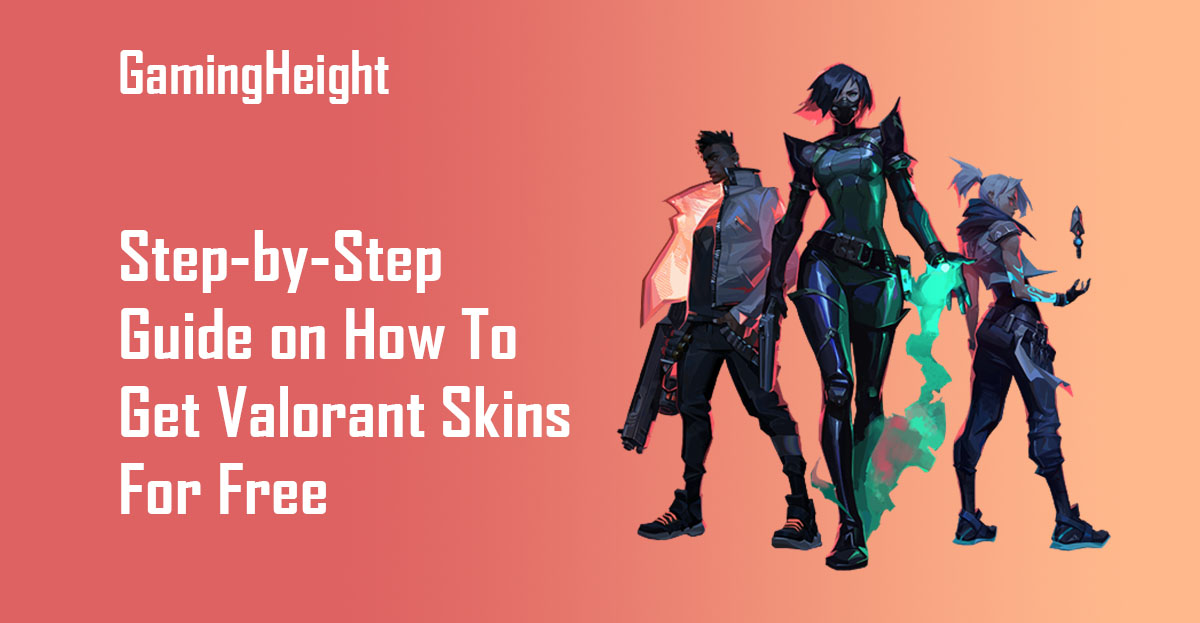 Everyone loves free stuff, particularly if it has to do with getting valorant skins. Most valorant skins come at a huge price, but there are some that you can get for free.

In this article, we will show you the step-by-step process of getting skins for free in valorant.

Weapon skins in games like valorant are second to none. Valorant skins can be expensive, but not everyone knows there are ways to use them for free. Let’s, therefore, show you how you can do that.

The first method you can use in getting valorant skins is when you complete agent contracts up to tier 10. Every agent in valorant comes with its contracts, and you can level up this contract to Tier 10 by garnering XPs. Once you attain tier 10, you can get some kind of weapon skin, even though this might not be more than a pistol.

That is about all to it. Once you attain level 10 for that agent, the skin will be unlocked.

Let’s take a look at the agents’ contract skins available in the current version of the valorant game.

The second method to unlock free skins will be by being a Prime Gaming subscriber. Now, this is not exactly free, because the Amazon Prime subscription must be paid for. However, there is a juicy catch to it.

Prime Gaming offers a free trial for seven days. This means that if there is a skin that you have been admiring, you can quickly grab it within this period and then eventually cancel the subscription. Quite sneaky, right? We thought so too, but it will definitely get you free skins.

You have to remember that you might not have top-notch skins via this method, although some of the skins you will get are fascinating.

Valorant comes with a battle pass for every act, and after this battle pass, players in the game can have access to free skins. To get this opportunity, you must ensure you play the game, complete the missions and earn XPs.

Once you reach the final level of the battle pass, you will be awarded free skins. This is another great way to obtain free skins in the Valorant game.

Is Every Skin In Valorant Available For Free?

Most of the skins in valorant must be bought, especially the exquisite ones. Apart from the methods we have enlisted to get Valorant skins for free, the other method of acquiring skins in the game is by buying them. This is the most direct and simple way to get skins in the game.

You usually don’t buy skins directly in the game. What happens is that you use Valorant points from the game store to exchange these skins. Direct purchase can acquire these valorant points inside the client.

You can also obtain valuable points from some special campaigns or even Twitch Drops. There are different options to buy skins through the game. Let’s quickly run you through these possibilities.

Buying Individual Valorant Skins: What You Need To Know

This is a pricey method of buying skins from the game. The advantage of this method is that you can go for the particular skin you like, without having to buy unnecessary additions or even duplicates. The issue will be that Riot Games does not regularly sell individual skins.

What they do is rotate the selection of some skins after a few days. This means you will have to be on the lookout for when the skin you prefer will be available, so you can buy the skin.

This is a cost-effective way to buy skins in the valorant game, although it is more expensive. The plus side is that you will get more skins for every dollar spent. It is a cost-effective method, because the game will discount the average price of the skins. Bundles of skins are only available for a limited time.

Every skin bundle comes with its peculiar rating, and as such, each rare tear will come with its price tag. The lowest tier you have in the game comes with a price tag of $40, while the ultra is about $100. The exclusive edition of skin bundles also comes with special prices. There are also options to unlock additional color schemes by using RP for the skin of your choice.

Now and then, Riot Games releases what is called the night market, something similar to the shop in the League of Legends. This night market usually runs for a few days, and offers amazing discounts on some skins.

The skins are discounted, and can be bought individually. This is one of the cheapest ways to buy skins in the valorant game, even though this method relies heavily on luck.

Why Are Some Skins in Valorant Rare?

While valorant game has become a top competitive game with many professional shooters, it has a significant part called the skin. With these skins, valorant players have a special experience while playing, and new skin collections are always released into the market.

Getting the skins from the skin market can be time-consuming, aside from that some skins are not common to get. What led to the rarity of these skin was that, though they are cheap, it was difficult to scale through passes when the valorant Battlepasses initially came into existence. This results in the skin being demanding.

These come with a graffiti theme, and every weapon produces distinctive color, which made it more creatively interesting to players than the sleek skins in valorant.

The aerosol collection was part of the valorant Battlespass previously released. Players could get skins for the Odin, Bucky, Operator, and Shorty when Episode 2 Act 1 came into existence on January 12, 2021.

The dot EXE collection was also part of the initial valorant Battlepass, which had available weapons for Odin, judges, vandals, and ghosts. These black-coated bodies and bright white lines skins were formed on August 4, 2020. It was a collection from Episode 1 act 1.

Polyfox collection being part of the initial valorant Battlepass offers players a collection of skin for sheriff, guardian, bulldog, and judge.  This triangular-shaped collection was for Episode 1 Act 2 on August 4, 20020.

During the formation of Episode 1 Act 1 on June 2, 2020, the kingdom collection was formed, and it is also part of the previously released valorant Battlepass.

These collection skins were a mixture of silver metallics and black grips with yellow lines by their side, and were available for Kingdom knife (as the game featured knife), Bucky, Phantom, Classic, and Spectre.

This luxurious texture collection had ivory white with fewer marks. It was part of the initial valorant Battlepass, and its formation was also during Episode 1 Act 1 June 2, 2020. The skins were available for a bulldog, marshal, frenzy, and stinger.

It collection had weapons for shorty, Ares, Spectre, and vandal. It was a metallic insect’s hive. Hivemind was also a released valorant Battlepass. It was available during ignition Episode 1 act 2 from August 4, 2020.

Ruin collections were one of the best valorant Battle Pass, which had a royal, as they possessed a metallic gold accent, dark black bass, and glittering red part.

It was available during the formation of Episode 1 Act 3 on October 13, 2020. Players could get weapons for shorty, vandal, guardian, marshal, and coveted knife.

All these skins, including arcane sheriff, champion 2021 collection, and wave finder shorty, are distinctive collections with factors that make them rarely available for players to find.

Can I Gift Other Players Skins in Valorant?

Gifting skins to other players has not yet been featured. You cannot gift skin collection to other players. However, the only gifting process known currently is to buy a Riot prepaid card for your team who are close.

But we hope Riot games will soon create a gifting system, and it will be a nice experience among players.

Is Trading Skins Allowed in Valorant?

Unliking players anticipate the creation of a gifting system from Riot games. The trading of skins may never be in valorant game due to the free-to-play nature of the game.

And also to release the latest designs of weapons, release events, and special content, the Riot game needs to maximize profits. So players should not expect trading of skin in valorant games.

What Can Skin Change in a Valorant Game?

As previously said, skin is a vital part of the game. It affects virtually every part of the game (the look of shooting and reloading, weapon model, sounds, and others). There is this feeling of holding a new weapon with a skin collection.

The weapon recoil patterns and stats can not be changed. They are all similar, as they are the determining factors in how guns work effectively during valiant games.

Is Odin’s Weapon Cheap in Valorant?

Riot games release lots of weapons for valorant. Professional players study the cost, damage, and ways to control the weapon to master in valorant.

Odin’s weapon is a light machine gun, usually not cheap. In fact, it is the second most expensive among valorant weapons. Only if players have a huge in-game account before they afford it. Apart from being an expensive weapon, it can damage whenever or wherever it is fired, either the body of your target or leg.

Odin holds up to 100 bullets and releases 12 bullets per second. Unlike other rifles, Odin’s LMGs have ADS (aim down sight) and hip fire, which can reduce the recoil of the weapon vertically and horizontally when you are firing.

What Are The Best Knife Skins for Valorant?

You will have a mastery advantage over your opponent when you have a good-looking knife in your hand to attack. Below is the list of the best knife skins you can have as a professional player.

A sovereign sword is one of the top best knives professional valorant players should have. It is magically equipped with its shiny blade and luxurious grip.

It magically releases a sky blue glow from the bade, and as the blade cuts through the air, it produces a creaky and sword-like sound, which makes it interesting to have.

Ruin dagger is readily not common in-game, it is usually acquired as a reward after completing an episode 1 act 3 in valorant game. It has a golden edge all-round, which makes it charming when beheld.

This knife, though with a high price tag, is one of the knives to have as a weapon when gaming in valorant. It produces a unique sound and changes color from blue to red, which makes it more special.

Origin crescent blade is a magical and beautiful knife skin. This weapon has a sharp tiny edge, and it is marked with green along the metal blade. Suspend this weapon in the air and see it magically rotate while on suspension.

This weapon is newly released, vibrant and colorful. It can spin, which makes it a better option for players who are spinning lovers.

The celestial fan knife has a horse-like head at both tips with blue and warm colors. This weapon, released during the Chinese new year, is a good choice for players who want to add Zen to inventory.

Valorant skins are part of what makes the game fun to play, but they are not all that easy to acquire.

However, with the steps we have highlighted, you can easily get your desired valorant skins for free. So, implement them and get those skins you desire.