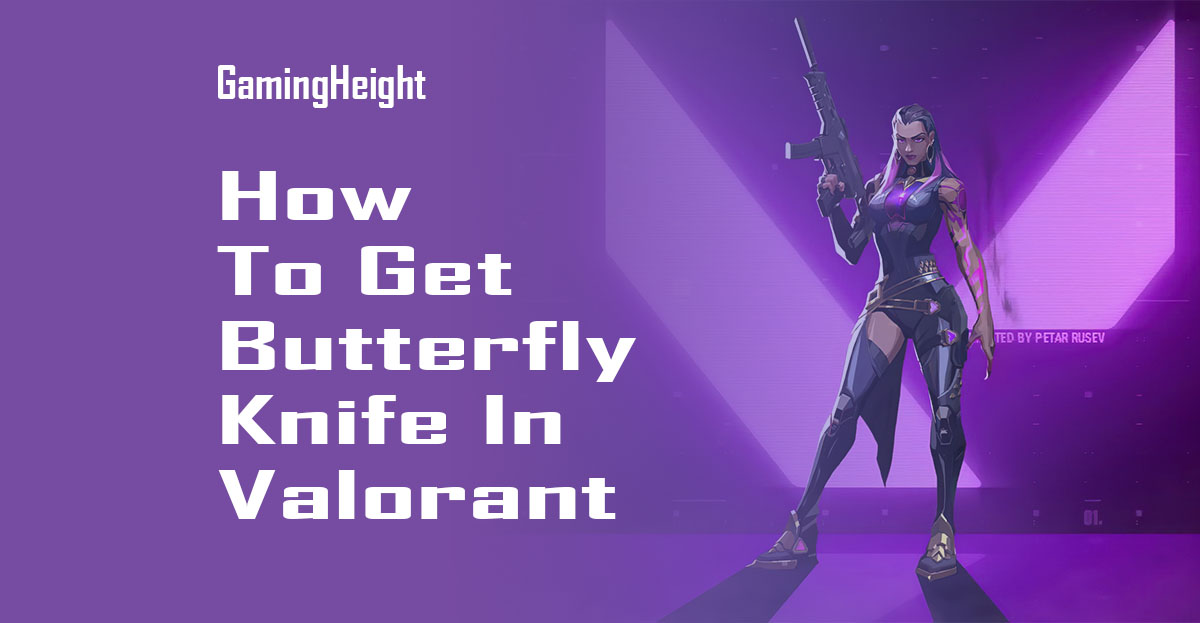 The butterfly knife has been made available in Valorant as part of a Recon bundle which is a military-inspired collection in the game. A lot of players have been awaiting the arrival of this knife and it has been named the Recon Balisong.

In this article, therefore, we will be bringing you up to speed about this new butterfly knife and how you can get it.

How To Get Butterfly Knife in Valorant

The valorant butterfly knife comes with a killing with style feel as it features an aesthetic design. A lot of fans have been anticipating this butterfly knife and it is now available. This Recon Balisong was made by the development team to add some form of realism to the game.

The Recon skin bundle is a great asset for players that love to show off their weapons in the game. It features a new butterfly knife that comes with the latest update and some mouth-watering skins that makes you appear like an undercover agent.

This new skin bundle comes with Phantom, Balisong (Butterfly Knife Melee), Ghost, Spectre, and Guardian. It is priced at 7,100 VP. You can decide to buy the butterfly knife as an individual piece or you could like the skins they come with and go for the perfect bundle bargain.

Buying it as a bundle will be cheaper than buying individual items. To buy the butterfly knife, you can follow these simple steps:

In the words of the developers of the game, the Recon skin was highly anticipated because of the butterfly knife that it featured. They wanted to give players something that would make them feel special and this butterfly knife delivers just that.

The animations have all come together to deliver this stellar knife and it is now up for grabs. So, if you follow the guidelines we have offered, you could be the next person to have this amazing butterfly knife.

What other amazing weapons can you use in valorant?

Apart from the butterfly knife, there are some other amazing knife skins that valorant has up for grabs. Let’s consider a few of these knife skins.

This is one of valorant’s premium swords and with its shiny blade and luxurious grip, it is hard not to see why it features as one of the top knife skins in the game. This is the major knife in the Sovereign collection.

The magic of the sword even gets better. After each slash that you make with this knife, you will hear a subtly creaky ‘whoosh’ sound just as the blade cuts through the air. After leveling up, the sword’s blade becomes a magnetic blue glow that makes it more amazing to look at.

There is nothing quite like the celestial fan in the game when you observe its unique draw animation and its thematic design. This weapon pays homage to the year of its origin which is the Year of the Ox and was released during the Chinese New Year.

Have you ever seen Chinese folding fans before? Great. This weapon’s design draws inspiration from those fans. It is now complete with a gradient of blue and warm colors with Chinese symbols spread across the entire length of the fan.

When you inspect the fan, you are bound to see it in all its glory. In this weapon’s default state, you will notice the tip looking like an ox with sharp horns. This is usually the part of the knife that does all the work of slicing and dicing.

With its amazing design, this celestial fan beats the typical fan dynamic well enough. You can be sure that this is another stellar weapon. This is a great choice if you are looking to add some Zen to your weapon inventory.

This weapon is a reward you will be getting upon completion of the Battle Pass of episode one: act three in the valorant game. With its sleek and golden edges, the ruin dagger is another stellar weapon that you would love to have apart from the butterfly knife.

It might not have the same degree of radiance as many other knives but you cannot take anything away from the build of this knife. The fact that it is now a battle pass item is enough to get everyone talking about this weapon.

From the double-edge appearance of this weapon to the lovely karambit-like draw animation, this dagger has a lot of charm up its sleeves. The fact that this dagger is not readily available like other knives makes it all the more something you will want to have.

Have you ever thought of an RGB knife that has built-in sound effects coupled with sound waves? Well, think no further as the spectrum waveform is about all you need as it features a weapon created in partnership with the artist ZEDD.

What makes this knife something to have in the valorant game is the satisfying sound animations that flow well with the beat of the knife’s sound effects. Add to that amazing sound the upgraded VFX changes in color cyclically, then you have an amazing weapon in your inventory.

The only downside to this knife will be its heavy price tag as it is considered to be one of the most expensive in the game. However, you can be certain that you will have your money’s worth with this knife. It is definitely a good knife to smash given that the price does not chase you away.

The tethered realms collection is actually a mix of the forsaken and sovereign skin bundles. These two themes are considered to be opposed. This weapon perfectly encapsulates this concept as both swords fuse to have a single-draw animation.

This weapon features a big blade that comes in a sleek and black metallic material that is striking and subdued with a cool green finish. You know the sword seen from the sovereign sun finisher, right? Exactly, the blade of this sword is exactly of that mold.

As you equip the main weapon on your hand getting ready for battle, you are also using the smaller blade. The smaller blade is the smaller and curvier weapon that the forsaken collection features. If you have been looking for a two-in-one deal, then, this weapon is something you want to try out.

Taking after the infantry skin bundle in patch 2.05, the Recon line is the second military-grade skin collection released by Valorant. It comes with a butterfly knife that has created a lot of buzz lately. We have shown you how you can get this amazing weapon.

We also included an extra of some other amazing weapons you can use in the valorant game.