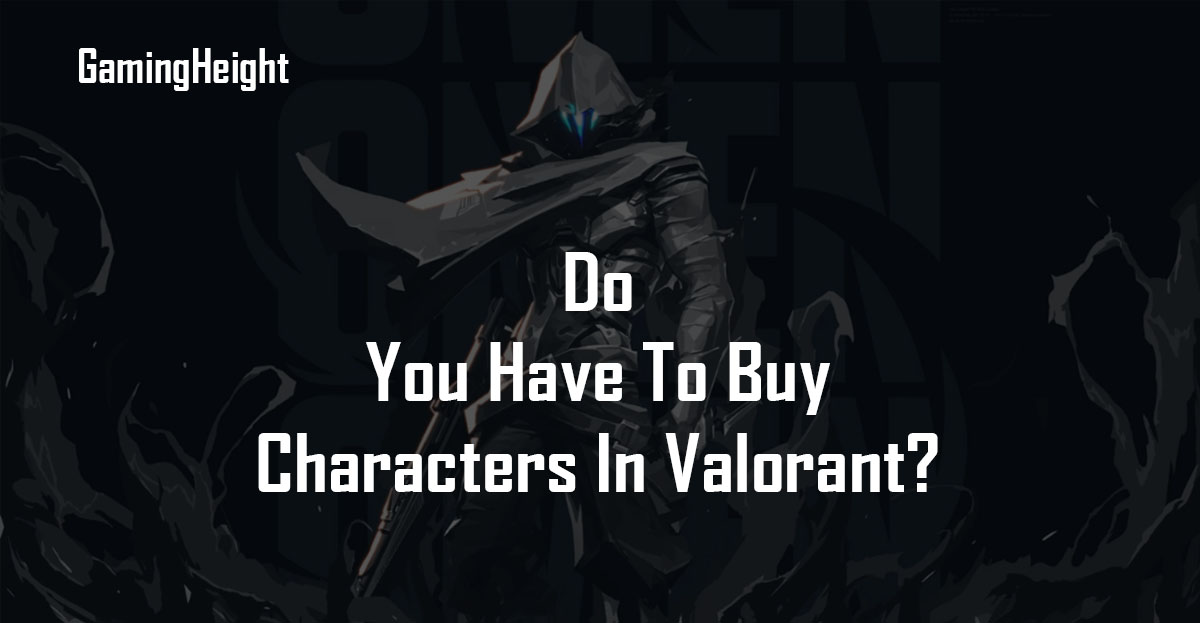 Valorant is a multiplayer game and one of the highly rated games created by Riot Games. Since the game has been released, this game has gone ahead to become one of the most highly-rated games in the gaming world, having over 50 million active players.

One major question different people tend to ask when playing valorant is whether they have to buy characters in valorant.

Characters in valorant are also called agents. And we all know having an exemplary character is as important as knowing how to play the game. Once you launch the game, you automatically get 5 characters for free out of the 19 characters available.

However, you can choose to buy or pay to unlock the remaining. But there are other options for unlocking character aside from buying.

For every level you complete, you’ll be given an option to unlock a character as a reward for completing a level. You can also unlock characters by completing contracts; even though it might be time-consuming, but you’ll get a character upon completing the contracts.

How To Unlock Characters In Valorant?

You can use different methods to unlock characters or agents, as some people call them.

Method 1: Paying To Have Characters Unlocked

This method is the first and most straightforward way to have your characters unlocked without having to play the game for long hours. If you have some cash to spare to buy characters without wasting time, then this method is for you.

However, using the method doesn’t come cheap at all. To pay for unlocking agents on valorant, use microtransactions to purchase Valorant points. One level is worth 200 points and costs $2. In other words, unlocking a Valorant agent will cost around $10, or the equivalent in your local currency.

Ultimately, paying for unlocking agents is far faster than completing contracts, which can take much longer. If you are prepared to spend money, you can reach Tier 5 and unlock your desired character by grinding the game and paying for higher rankings.

This is another way of unlocking players if you do not have spare cash to spend on a game. All you have to do complete contracts and get the characters unlocked.

This is how to unlock characters by completing contracts.

Step 1: go to the game menu and click on” COLLECTION”

Step 2: After clicking on “COLLECTION” click on ‘agents’ in the top left corner

Step 3: After clicking on “agent”, it’ll bring out a list of agents. Choose the one you want to unlock and press ‘ACTIVATE’ under the avatar.

Step 5: After completing the steps above, you should see the locked agent’s contract. Each agent has ten levels, which can be unlocked at level 5 by collecting XP while playing the game.

You can unlock two agents for free by playing a few games. When you first log in, you’ll be given a mission that requires you to level up.

A progress bar will appear at the bottom of your screen on the “Latest” tab in the main menu, indicating how much XP you need to earn. There are ten levels, and a new Agent can be chosen at levels 5 and 10.

Level 10 takes three to five hours to complete, depending on how well you perform in each match.

Can You Unlock All Characters On Valorant Without Buying?

Yes, you can unlock all of the Agents in Valorant for free, but it will take some time. After reaching Level 5, each locked Agent becomes eligible for unlocking, and leveling up is determined by the number of experience points collected. If you don’t want to spend real money, you’ll have to put in the time to game for those points.

How Long Does It Take To Unlock A Character In Valorant?

The time it takes to unlock an Agent in Valorant is determined by you, the amount of time you spend playing, and the number of missions and challenges you complete per game.

You’ll need 125,000 XP to advance a locked Agent from Level 1 to Level 5, where they can be unlocked. That takes some time, but strategizing your gameplay, such as focusing on Daily Challenges, can help boost your XP and cut down on that time.

Can You Unlock More Than Two Characters In Valorant?

Why Can’t I Unlock All Agents In Valorant?

You need to meet a few requirements before you can unlock all the Agents in Valorant. They include:

Which Is The Fastest Way To Unlock Characters?

The fastest way to unlock all Agents in Valorant is to pay for them yourself. You’ll have to play the game if you don’t want to pay $120 to unlock all of the agents, minus the two you get for free.

The XP you earn while playing is used to unlock Agents. To unlock your agents quickly, strive to complete as many Daily Challenges as possible and prepare for hard grinding sessions.

Here’s a list of all valorant characters that you can choose from;

Astra is one of Valorant’s most unusual agents because she can be placed anywhere on the map. She’s a controller who can set up her team with smokes, stuns, and black holes and play the game like a chess match.

Breach is built to be an initiator who excels at breaking down walls and opponents positioned to hold chokepoints. His mechanics traverse the ground and the map to CC and kill adversaries.

Brimstone is a tactical commando with varied abilities involving using the minimap. He can launch smoke grenades, napalms that operate like molotovs, augment partner agents’ firepower, and launch an airstrike.

Chamber serves as a sentinel but is the most aggressive of valorant’s characters. His teleport skill allows him to spy unsafe angles and uncover opening picks for his team; most of the time, if he teleports on time, he can escape unpunished.

Cypher is a spy who uses his camera and tripwires to obtain information.

Jett is Valorant’s most mobile agent, making her an outstanding duelist, especially with her knife ultimate.

Neon can sprint across any map quickly and thrives on catching enemies off guard by quickly repositioning herself. Furthermore, her slide allows her to engage in a way that makes her difficult to trace and gun down.

Bare in mind, however, that completing contracts can take a longer time than just buying XP with cash