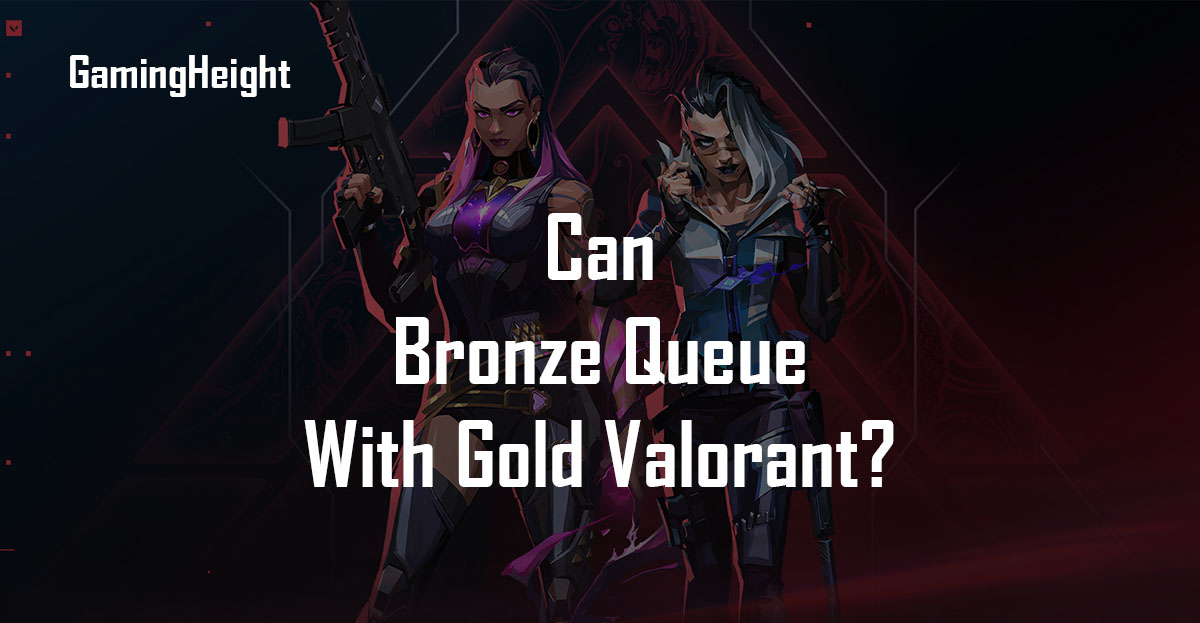 Valorant Episode 3 Act 3 is an update to the game’s competitive ecosystem. Riot Games has continued to make changes to the queuing system since the game was released in 2010. This new update steps it all up.

In this guide, we will cover the possibilities of having a bronze queue with gold in the valorant game.

Can Bronze Queue with Gold Valorant?

Following the new update to the game, all valorant ranks can now play in one lobby. There used to be a rank disparity that restricted bronze players from entering the gold and silver lobbies. All that will change in the latest update to the valorant game. This means bronze can now queue with gold in valorant.

In their bid to combat the smurfs, the developers have gone the extra mile by permitting five stacks for the first time in the history of the game. In their words, they want to reduce smurfing, and as such, they have removed the ranked restrictions from 5-stack parties in a competitive queue.

The data of the game has shown that players want to smurf because they want to play with their friends outside the boundaries that the currently ranked restrictions have put in place. So, these restrictions will be off in no time.

Following this new update to the game, there will be no restrictions on the ranks that can enter a lobby. Although, you must remember that some specific rules will apply in such scenarios.

Five stacks will have an increased queue time once they play together in the game, and this has been a major issue since the development of the game. After this new update, stacks above Diamond 3 might have to wait longer in the queue.

The system has been designed to only allow diamond 3 and above stacks with similar MMR five stacks to ensure fair play in the game, and this will take time. Those who have no issues waiting must know that five stacks will cost them plenty of RR points. Gains and losses will see a reduction in the game when you are playing in a five-person lobby beyond the rules of the ranked restrictions previously in the game.

The amount of adjustment your RR points will have depends on the rank disparity you have in a group. If one of the members in this lobby is outside the rank limit for the lobby, there will be a 50% reduction in RR points. This percentage will continue to increase depending on the number of players not within the rank limit of the game.

As the rank scale upwards, the RR reduction can get higher. A good example will be if you have a member within that lobby in the radiant rank, and there is another player with a rank lower than the radiant, there could be a 90% reduction in the RR points.

So, even though the developers have succumbed to the popular demands of allowing players from different ranks to play each other, the rules guiding this gameplay are a little severe. Players interested in grinding ranked queues will give up many RR points, which will slow down their ranking journey.

Whether this is worth the hassle will depend on the players themselves. You must however remember that only lobbies with five persons will have an exemption to the previous ranking restrictions.

If the stack is under five players, there is no possibility of players queuing with those outside the valorant rank restrictions. To reduce the toxicity in the game, the developers have also removed the four stacks option.

After leakers have revealed that free five stacks will return to the valorant game, some players have raised concerns about whether lobbies will not become overly saturated with low-ranked players. Having a mix of iron, platinum, and immortal players might have negative impacts on the ranking system of the game.

Some parties have suggested the best fix will be a two-tier system. This will work in a way that players in the rank Platinum 6 can queue up to people with six rank differences. However, once you are in Platinum 1, you can only queue up with players in Gold 1, Silver 1, and the likes.

What Is The Ranking System In Valorant?

The ranking system in Valorant has been fashioned in ascending order. What this means is that Silver 2 is better than Silver.

What Changes Have Been Made In The Competitive Queue?

At the moment, valorant players can only play in five-stack queues, so long as they are below the Diamond 3 rank. However, this is changing, as everyone can play in 5-stack queues with no restrictions.

Is It Possible To Play in a 5-stack Queue In Valorant?

Very possible, this is one of the changes made in the latest update of the game. You must however remember that wins in these categories will have a low Elo rating. Even though this is some exciting news, it comes with its downsides.

Is a Ranked Queue Necessary?

Ranked queues help fight annoying smurfing players that lower-ranked players have to deal with as they climb up the ladder in the game. The possibility of creating new accounts just to play with lower-ranked players will also reduce. As an iron 1 player, you can only queue with at most silver 3 players.

Different players have considered the possibilities of gold and bronze queuing in valorant. With the new updates to the game, this is more than possible, as the restrictions have been lightened up.